If you’ve ever wanted to hide in the tall grass or in a tapestry of flowers, than you might relate to the characters in Monica Rohan paintings. In each of the works below, we see at least one figure that is paired with an amorphous and highly-patterned shape — a crochet blanket in one, a patterned dress in another.

In the video below, the artist talks about the importance of patterns in her work, describing it a both obsessive and meditative. She reveals the deep feelings of social anxiety that the works represent, and shares how the paintings have become a way for create a dialogue with other who share similar feelings.

Rohan is represented by Jan Murphey Gallery in Queensland, Australia. 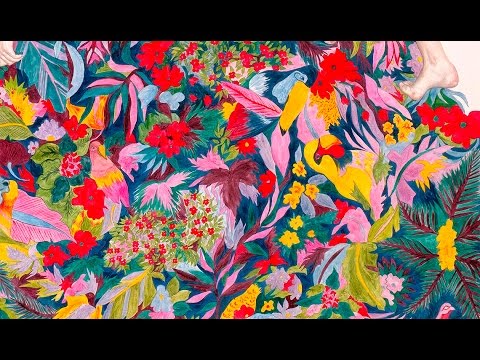 Dario Moschetta creates art that is rough, irregular, uneven to the touch, but all the more REAL

The piano gets a soft modern facelift, but this product is no push over

This hair of mine – a celebration of African hair styles

Sculpted skeletons of classic cartoon characters. Can you recognize them?

Can you recognize a hero by his hat?

Intricate animals with fur made from insanely thin wood shavings

7 creepy illustrations of smiling children with no eyes

Eli Lotar’s photography and cinematography, leveraged by his relationships, reflect his politics and time

AI in every house

Enter your query above and press return to search, or press escape to exit.